Amanda Swann has written and researched this insightful story from the Stockport Archives.

In researching the effect that the war had on schools in the Stockport area through the logbooks held in the Heritage Library archive, I discovered that one of the biggest disruptions to everyday school life in the area was the acquisition of school buildings by the War Office for use as military hospitals. This began to affect Stockport in March 1915, with the Stockport Advertiser reporting on Friday March 26 1915 that the Mayor had been asked by the Military Authorities which schools could potentially be used as hospitals if required. It was also reported that accommodation for 750 beds might be needed across the borough. The suggested schools were inspected for their potential use, being noted as “new schools with good light and ventilation and [which] from every point of view would make good hospitals”. The schools eventually taken for use as military hospitals in Stockport were St George’s school in Heaviley, Hollywood Park and Alexandra Park schools in Edgeley, and Greek Street Secondary School. The first patients are reported as being admitted into these military hospitals in July 1915 (Stockport Advertiser, Fri July 2 1915, p.5).

When the schools were taken for use as military hospitals in March and April 1915, it was agreed that the children from the affected schools would be distributed amongst other schools in the area. The Edgeley Council Infants School logbook notes on April 1 1915 of a meeting with the “Chairman of the Primary Education Committee (Mr J Forster, J.P) […] at 4 o’clock on Tues aft next, the 6th instant, at No 2 Committee Room, Town Hall, to consider the best arrangements to be made for instruction of scholars in schools affected by Military Hospital considerations”. As a result of meetings such as this, the affected schools began sharing school premises with remaining schools in the borough, and operating their timetables on what was known as either a two-shift, double-shift or four shift system. The two schools operating on this system would each take a morning and afternoon session, dividing the school day into 4 sessions for 2 schools. The logbooks for Edgeley Council Infants School, who took on pupils from Alexandra Park Juniors School, and St Peter’s School, who took on pupils from Hollywood Park School, record the changed timetables accommodating the altered system, from which they alternated between earlier and later shifts on a term-by-term basis. 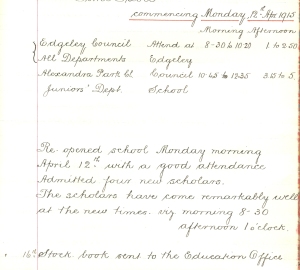 The transition to sharing the school premises between two different schools seems to have, understandably, initially caused some disruption. As the opening and closing and hours of the schools were extended to accommodate the growing numbers and need for alternating shifts, an effect could be noted on both attendance and progress within the lessons. Just one week after St Peter’s School had switched to a double shift system in order to accommodate Hollywood Park School in the week ending 16 April 1916, the logbook notes that “The under fives do not attend well in the mornings 8.30am being early for them”. A few weeks later, on June 4, the St Peter’s logbook again notes that the “early meeting of school affects attendance greatly”. This on-going disruption and routine sense of change to the school lives of affected pupils continued until September 1919; the significant amounts of injured soldiers needing treatment requiring the continued use of school buildings as hospitals until nearly a year after the conflict ended. The logbooks reveal a sense that this constant changing of attendance times became a routine aspect of school life, presumably lasting for some pupils for the entire duration of their attendance there. Edgeley Council School notes the changing of times every term, for example, throughout 1918 and 1919 as “in accordance with custom”. The Stockport Advertiser also reports, in August 1919, of a delay in the return of the school buildings occupied as military hospitals to their original occupants. Whilst the townspeople had no desire to unduly remove the injured who had fought so bravely for their country, the length of time between the discharge of patients and closing of the hospitals seemed excessive. On August 22 1919, an article in the Stockport Advertiser states: “There has been no desire as far as Stockport is concerned to unduly rush the military authorities, but when we know how long the hospitals have been empty of patients, and the delay in removing equipment and handing the schools back to the local education authority, there seems very good cause for complaint.”   The buildings are reported as being closed down as hospitals as far back as May of that year and yet still remained unable to allow children to return there for their education at the beginning of the new school year in September. In the words of the reporter: “Stockport was very patriotic in regard to placing its best school buildings at the disposal of the military authorities, and undoubtedly the education of the children suffered through the lack of accommodation caused by the withdrawal of these schools – a regrettable but unavoidable effect – but there should be no excuse for any department withholding buildings from their legitimate purposes a moment longer than is necessary” (Stockport Advertiser, August 22 1919, p. 4). This continued and prolonged disruption must have undoubtedly have impacted upon the lives of those trying to move from the horror of the conflict, serving as an extended reminder of those injured or lost.

However, it seems, from looking at some of the logbooks for the schools directly affected by the acquisition of buildings for military hospitals and other schools in the area, that the sharing of school premises and the disruption this brought may have served as a reminder of the sacrifice many men were making for them and their country and drawn together those at home. A feeling of community seems to have been evoked amongst the disruption caused by the transformation of school buildings into hospitals, which led to the sharing of school premises. The increased presence of soldiers within the area as patients within the hospitals also seems to have evoked an appreciation for the soldiers’ sacrifices and a willingness to show gratitude. The logbook for another local school, Brentnall Street Infants School, records a number of charitable donations and sending of gifts to the wounded soldiers in the local hospitals including collections of eggs sent to Greek St and St George’s hospitals on September 22 1915, March 22 and July 6 1916, and February 23 1917. The Stockport Advertiser also reported at the beginning of the occupation of school buildings as military hospitals in April 1915 of the co-operation and unity required by the local community in relation to this, stating that: “The times demand that there should be a spirit of co-operation in all matters which are for the benefit of the state or the individual and particularly should it be so in a case [where schools are being used as hospitals and] where the authorities are handicapped as a result of the war, and are endeavouring to ‘carry on’ as usual” (Stockport Advertiser, Friday April 9 1915, p. 7) The newspaper also highlighted the impact the sharing of schools was having on the schoolchildren in relation to the wider context of the conflict taking place overseas. On April 16 1915, in an article outlining how the children had settled into their new school routines, the Stockport Advertiser reported that one of the notable effects of the new system was that the children “are realising how they can play their part in the war” and that “the way in which everyone settles down so quickly to a new mode of life is one of the surprising features arising out of the war”. It’s particularly heart-warming to read the positivity reported to arise out of difficult and challenging circumstances such as these.

Another instance of the human nature of the effects of World War I can be found in the appreciation showed by the pupils of Alexandra Park school and their hosts during the war, the Edgeley Council Infants School, during the time the schools were occupied as hospitals. The Edgeley Council school logbook notes on September 12 that “‘Our late guests’, the Alex Park teachers and scholars have returned to their own school. During the whole of the time they were with us, a period of 4 years and 4 months, a true spirit of comradeship was maintained”. Two weeks later, on September 26 1919, the admiration felt towards their ‘late guests’ is reciprocated by Alexandra Park Junior school: “This afternoon we have received from the teachers and scholars of Alex Park Junior School, a beautiful picture. The letter accompanying the picture asks us to accept it as a ‘token of appreciation and kindness shown to them during the time they were our guests 1915-19’”. It is instances such as this that reveal the toll on everyday life the First World War had, away from the trenches, and highlight the extraordinary ways in which war reveals the true benevolence of people to help their community and country. 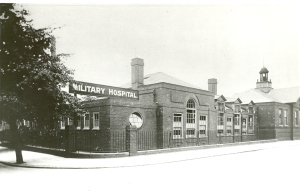 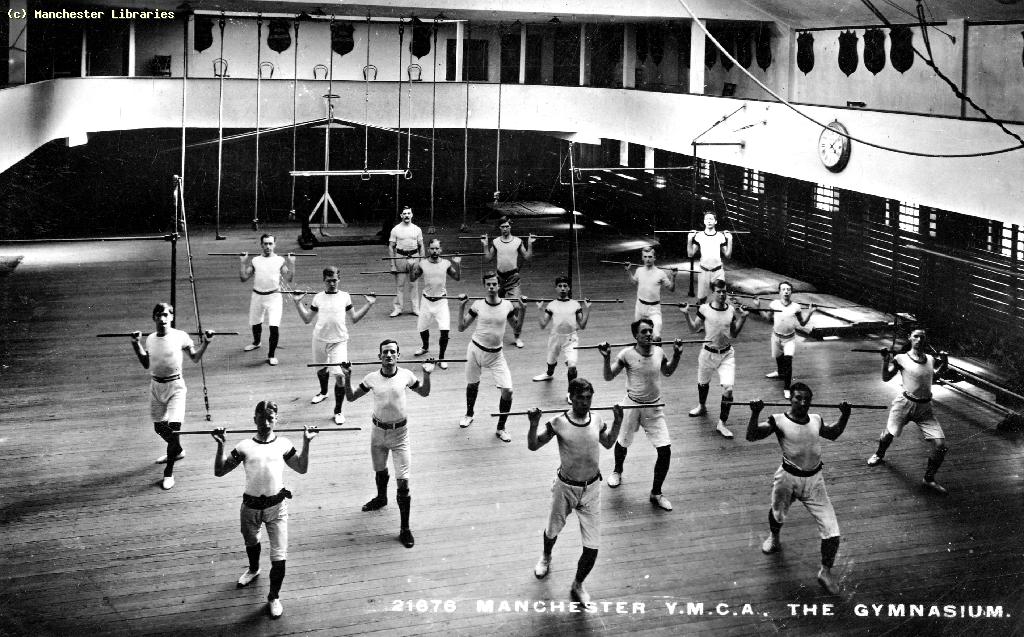