Lesley Oldham has volunteered at the Greater Manchester County Record Office. Her medical knowledge and background in the TA has been very valuable in helping identify the significance of some of the records held there relating to the Great War. Lesley has researched and written this post about the RAMC.

When I first got involved with the archive I decided to have a look at the  Manchester Archive + flickr webpage on the First World War. I was hoping to find pictures relating to the East Lancashire Field Ambulances who I have had an interest in for many years. As a serving member of the local TA (now the Army Reservist) medical unit (207 (Manchester) Field Hospital) I regard these field ambulances as my military ancestors. I was surprised therefore that on the very first page I found two pictures where I could recognise two people, one of which was marked “First World War Officers- no details” So I decided to do a little digging to see if I could identify any of the other people in the photographs.

Firstly the picture showing the Royal Army Medical Corps at Whitworth Street Military Hospital (the Headquarters of 2nd Western General Hospital). It must have been an important date judging by the decorations behind the men. The officer sat in the middle wearing the lighter coloured riding breeches is Lieutenant Colonel Frederick Hibbert Westmacott. How do I know this? Well I have passed his picture regularly for more years than I care to remember on a board of various senior officers who have commanded the Volunteer Medical Services for over one hundred years. He commanded 2nd Western General Hospital from 2 October 1915 until 12 April 1917 (others give slightly different dates but only by a few months) until he mobilized to command 57th General Hospital which deployed to Marseilles, France in July 1917. He commanded 2nd Western again from 2 October 1917 to 15 May 1918 when he returned to France where he remained until the Armistice.

The only other person who is identified is William Strutt, (front row, third right) whose relative donated the picture to the archive. I have tried to find out more information on William using the WW1 medal roll index and the 1911 census but without success.

Lieutenant Colonel Westmascott is stood to the left of the picture as you look at it. I recognised some of the other faces in this photograph from another  that appears to have been taken at the same time, held in the photograph archive of 207 (Manchester) Field Hospital and thought to be taken inside 2nd Western Hospital on Whitworth Street.

So knowing when Westmacott commanded the hospital I searched the local newspaper archive for events that may have been related to the pictures. I found a visit by Field Marshal Lord French to Manchester in November of 1916 which was to include the hospital. French had been the Commander in Chief of the British Expeditionary Force at the start of the war until his resignation (sacking) in December 1915 when he look up the post of Commander in Chief of the British Home Forces, so there are plenty of images of him on the internet. I think I can safely say the officer Westmacott is talking to is Lord French. The papers mention that Sir William Pitcairn Campbell, the Commander in Chief of the Western Command,  accompanied him on his visit. Again using images from the internet I think he is stood behind Lord French on the right as you look at the picture. The man with the top hat and chain I assumed to be the Lord Mayor of Manchester who was at that time Alderman Thomas Smethurst.

But the man who I recognised immediately and whose image drew me to the picture was that of Colonel Sir William Coates. At that time he was the Assistant Director of Medical Services of the Western Command. He is the small man whose face is half hidden by Lord French.

Why am I so sure it is him?

When I first joined the TA part of the induction was to be shown around the Coates room of the Officers’ Mess, which at that time housed pictures of former Commanding Officers and many of their medals. Chief among them was William Coates who had, during ‘the Great War’, been awarded Officer Order of the Crown (Belgium) for his support to Belgium. I always wanted to find out more about what heroic deeds he performed in Belgium that prompted such an award. 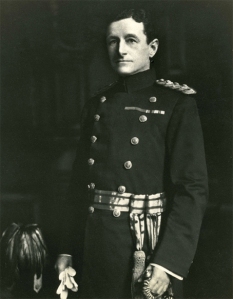 It is only in the last few years when the TA Centre (still used today) he helped to build for the Royal Army Medical Corps Volunteers in the early years of the 20th Century  was renamed after him that I fully understood the impact the deeds of this man had on the provision of medical care both on the home and foreign fronts during the war.

Born in Worksop in 1860 he trained as a doctor at the London Hospital and moved to Manchester to take up practice in 1884. In 1885 he became Acting Surgeon to the 20th Lancashire Rifle Volunteer Corps and shortly after he was instrumental in the formation of the Manchester Volunteer Medical Staff Corps. From this point on he was a major influence on the provision of voluntary military medical services not just in Manchester but in the Country, sitting on Haldane’s Committee on Army reform that brought about the formation of the Territorial Force in 1908. He did not limit his actives to military medical services and in 1910 organised and formed the East Lancashire British Red Cross Society.

By the start of the war East Lancashire and North East Cheshire were ready to provide four Field Ambulances, three deploying to Egypt and one to France in September 1914, a casualty clearing station, a military hospital in the form of 2nd Western General Hospital plus a large number Red Cross Hospitals. It speaks volumes of Coates’ organisational and planning skills that 2nd Western opened its doors just 10 days after it had been mobilised, admitting its first patients on the on the 16th August and its first overseas patients on 20th September. By the end of November 1914 the hospital had admitted 5560 wounded patients including 43 Germans and 1172 Belgian officers and men.

The determination of Coates and his ability to think ‘outside the box’ was shown when the men of the Manchester Companies of the Royal Army Medical Corps refused to join the new Special Reserve in 1908 (which would require them to serve overseas) due to their experiences in the Boer War when, whilst leaving Manchester together, on arrival in South Africa they were separated. Coates proposed and gained War Officer approval for the formation of No. 18 Field Ambulance, Royal Reserve Army Medical Corps with reassurances that should the need arise to mobilise for overseas service they would do so as a formed body. The Ambulance was experimental and as far as I can tell the only one of its kind. When war came No. 18 Special Reserve Field Ambulance arrived in France on the 10th September 1914 as part of the 6th Division. It remained on the Western Front until 1919 when it returned to Kinmel Park, according to the last war diary entry on 20th September 1919.

Several years ago I had the good fortune to meet William Coates’ grandson Michael and was able to talk to him at length about his grandfather  with whom  he had  lived as a child. What came across were Coates’ personality and the traits I most admired him for. He was a practical man good at problem solving with little time I think for sentimentality. But he was a compassionate man who worked tirelessly for the good and benefit for those around him. Michael told me of one occasion after the war when Sir William discovered that a member of his household staff had stolen some money from him. At that time, as can be gleaned from other posts on this blog, the staff member should have expected  harsh consequences for the theft. But Coates did not dismiss the man nor did he turn him over to the police. He did however make the man pay back the money in full and the man remained with the family for many years.

Sir William knew many of the most prominent medical men of the day, including Sir Frederic Treves. On one occasion Treves took Coates to visit the Star and Garter Home for disabled servicemen at Richmond. Coates was so impressed that he helped to provide similar facilities in the North. Four houses where purchased with a view to great homes for Totally Disabled Soldiers, one at Wyborne Gate, Southport, one in Blackburn and Grangethorpe House, Rusholme, the latter becoming an orthopaedic hospital. The fourth, Broughton House, still exists today as a home for ex-service men and women.

As for why Sir William got awarded Officer Order of the Crown I still don’t really know but I expect it was in recognition of all the wounded Belgium troops treated in East Lancashire. As far as I am aware he never actually went to any of the battle fronts. None of his medals were for heroic deeds, saving lives whilst putting his own at risk, or for working long hours in the trenches in difficult conditions. Rather they were for his tireless work in providing medical care both during and after the war to all who needed it. He was a modest man, you will not find much about him on the internet. Even the online picture of him on the National Portrait Gallery website is labelled simply ‘Physician’. Yet his actions still impact on people’s lives today particularly in the form of Broughton House which still holds true to Sir Williams’s vision of caring for ex-service personnel long after wars are forgotten.

One thought on “The Royal Army Medical Corps: some personal connections”