Margaret Koppens has researched and written this post from Bolton. 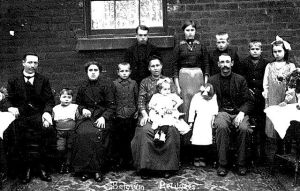 In August 1914 Germany invaded Belgium and to escape the atrocities taking place, over 220,000 Belgians left their homes to flee to England, the largest contingent to ever come here. Many of them were brought to Bolton and by early September the Bolton Catholic Women’s League were busy finding accommodation for the refugees from this largely Catholic country, in the Bolton area. They arrived with nothing, having had to flee quickly to escape the commandeering of their homes and the destruction of their possessions.

The Fourgates Old Church School, Westhoughton which had been unused for over six months was made ready by the residents and members of the church who quickly transformed the one-roomed building into a home with carpets, comfy chairs, beds and blankets. The first two families to arrive were Mrs & Mrs Cornelius and their child who had been turned out of their home and forced to live in a one-room shed while German soldiers moved into their house. Mr & Mrs Klutz and their eight children lived a peaceful life in a small village until the German soldiers arrived. They lined up and shot Belgian men who had a tattoo on their arm denoting that they were liable for Belgian military service. Mr Klutz had this mark but had been rejected due to ill health. His wife gathered their children together and they fled travelling for days facing shelling all the way, sleeping where they could and without food and warmth until they eventually reached the coast and a boat to England. They found sanctuary with the people of Westhoughton who looked after them and made sure they wanted for nothing.

The Rev. A Vantomme, Rector of Holy Infants Church, Astley Bridge who was himself a Belgian, acted as interpreter to all the Belgians in Bolton and he gave hospitality to several of them in his Rectory. Another large party of 31 were housed at ‘Thornleigh’; these were professional gentlemen, their wives, children and servants, who again came away with very little in the way of luggage, valuables and money. They were sad that their beautiful homes in Brussels would be broken into and ransacked but they were grateful for the hospitality afforded to them in Bolton.

The Egerton, Eagley, Dunscar and Bromley Cross Belgian Relief Committee had five adults and four children in its care in November 1915. They were housed at Dimple in two cottages lent rent free by Mr Edward Deakin.

The children needed schooling and in 1915 a Belgian male teacher was appointed at Horwich Lady of the Rosary RC School and Miss Elise Scholz from Antwerp commenced duties at Derby Street Infants School. M. Paul Pastiels a highly qualified young surgeon spent several weeks working at the Bolton Infirmary before leaving for a post in Italy.

In June 1916 at a meeting of the Horwich Branch of the Belgian Union of Help a speech was given by M. Galle, the Belgian Consul in Manchester. He expressed the thanks of the Belgian people in Horwich for all that had been done for them in their hour of need and he said it would live for ever in their memory.

In 1934 the gift of a seat was given to Edgworth by Belgians who had lived in the village during the war. The inscription on the seat read ‘A few friends who lived at peace in Edgworth, sharing its life during the four years of the war, give this seat as a sign of friendship and remembrance, 1934.’