Margaret Koppens, a volunteer with Bolton Archive and Museum, has written about Bolton’s own Dr Johnston and his experiences in the Great War.

FROM THE DIARY OF DR JOHN JOHNSTON 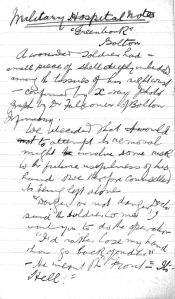 This extract is taken from the diary of Dr John Johnston

A wounded soldier had a small piece of shell deeply embedded among the tissues of his right wrist – confirmed by X-ray photograph by Dr Falconer of Bolton Infirmary.

We decided that to attempt its removal might involve some risk to the future usefulness of his hand and we therefore counselled it being left alone. “Danger or no danger” said the soldier to me, “I want you to do the operation, I’d rather lose my hand than go back yonder”. He meant the Front – “it’s Hell!”

In his diaries Dr Johnston writes of conversations he had with soldiers whilst in the Military Hospitals recovering from their wounds, here he records treating a young Scot from the battle of Neuve Chapelle who had suffered a horrible laceration through the thigh from shrapnel. Dr Johnson said to him “that must have made an awful mess of you, boy.” The soldier replied “Ay it did that Dr, it tore my clothes to ribbons and they had ta burn ma kilt!”

Dr Johnston was 62 years old when he joined the staff of Queen Mary’s Military Hospital at Whalley where he spent 16 months before leaving to take up the post of Assistant Medical Superintendent at Townley’s Hospital (now the Royal Bolton) in February 1917. Prior to this he had been a lecturer and instructor for the St. John’s Ambulance Brigade for over 25 years and was the divisional surgeon of the Bolton Corps. and the holder of the St. John South African War Medal. He was the author of several books and a volume of verse and had written travel articles for newspapers. Dr Johnston was also a prominent member of the Bolton ‘Whitmanites’. A group of people who were followers of Walt Whitman, the American poet, indeed Dr Johnston had visited Whitman at his home in America where he was given the Loving Cup which is now held in Bolton Museum.