Oldhamers Arrested Suspected of Being Spies:

An Artistic Excursion and Its Sequel

In prevailing circumstances naturally there is a good deal of suspicion, and the necessity of preventing news reaching the enemy renders it imperative that the utmost vigilance should be shown.

In August 1914 two Oldhamers and members of the Oldham Artists’ Society, Mr J. R. Sugden and Mr A. Winder, on holiday at Abergele, North Wales found themselves victims of this ‘utmost vigilance’:

The two gentlemen are spending their Wakes holidays at Abergele, and decided to devote yesterday to artistic excursion, selecting Conway Castle as the rendezvous. They left their apartments about 9am and settled down in a convenient spot to sketch Conway Castle. They had not been long at their labours when they were surprised by the military, and requested to accompany them to Conway Castle and bring their equipment along. They were taken to the Castle at ten o’clock, and an explanation of their movement and full particulars of themselves required. These were furnished, and inquiries instituted. Inquiries were made at their apartments and words sent through to Oldham. Mr G. Braddock, of Oldham, called during the day and vouched for the suspects, but he was asked who would vouch for him. Mr W. Barton, MP, also called, but the young men were kept in custody and their equipment detained and examined. It was not until 5.30 in the evening, when word had come through from Oldham that they were allowed to depart, none too pleased at being detained, but doubtless gratified that they were not on the Continent where to be accused is to found guilty and dealt with accordingly. Perhaps if the Government segregated the enemies within our midst there would be less reason for suspicion and less inconvenience to our own people, and there would be certainly more effective means of preventing leakage of information.

If Messrs Sugden and Winder were ‘none too pleased at being detained’ neither could the Oldhamer who in September paid the ‘penalty of curiosity’:

An Oldham man is now paying rather dearly for having satisfied his curiosity. He is engaged in the South of England, and when out for a stroll in the afternoon, thought he would have a look inside an arsenal in the district. How he got within the prohibited area without being challenged is not quite clear, but when leaving he was stopped, and being unable to satisfy the sentry he was at once taken into custody. He was rigorously confined for four days, and since then has put another eight days in Brixton prison. The gentleman in question is the son of a much respected Oldham man. The son, singular enough, speaks some German, and is married to a German lady. At the time he was taken into custody he had in his possession an invitation to a German club.

Perhaps the most ironic incidence occurred on the east coast in the middle of August 1914 as recorded in latter from a Mr A. C. Gardner of the Shakespeare Hotel, Oldham, from Southend-on-Sea:

One Wednesday he and his wife met three Oldham men who had motored over from Newark to Southend, arriving late Tuesday night. On Friday the three of them motored to Shoeburyness where the motor had a slight puncture. Mr Harry Bardsley, of Victoria Street, Shaw, was driving the car, and the other two were Mr A. Whittington of Oldham Road, Shaw, and Mr T. Richardson, of Colwyn Bay and late of Oldham.  Whilst Mr. Bardsley was attending to the repair of the car the other two decided to look around the place. Mr Richardson took his field glasses to view the harbour, and Mr Whittington took his camera in order to get a photograph of his friend. A German Jew who happened to see them informed the military authorities that the breakdown of the car was a hoax, and that the men were German spies. A party of soldiers, with loaded rifles, marched up to them and arrested Mr Richardson, who had chaffed the soldiers and asked them if they would like their photographs taken. Realising the seriousness of the affair, however, Mr Richardson went to the barracks with the soldiers, and was there submitted to a searching examination along with Mr Whittington, who had followed his friend. The men were detained for over three hours before they were released, and than the camera was confiscated. Mr Bardsley drove them back to Southend amidst great cheering. 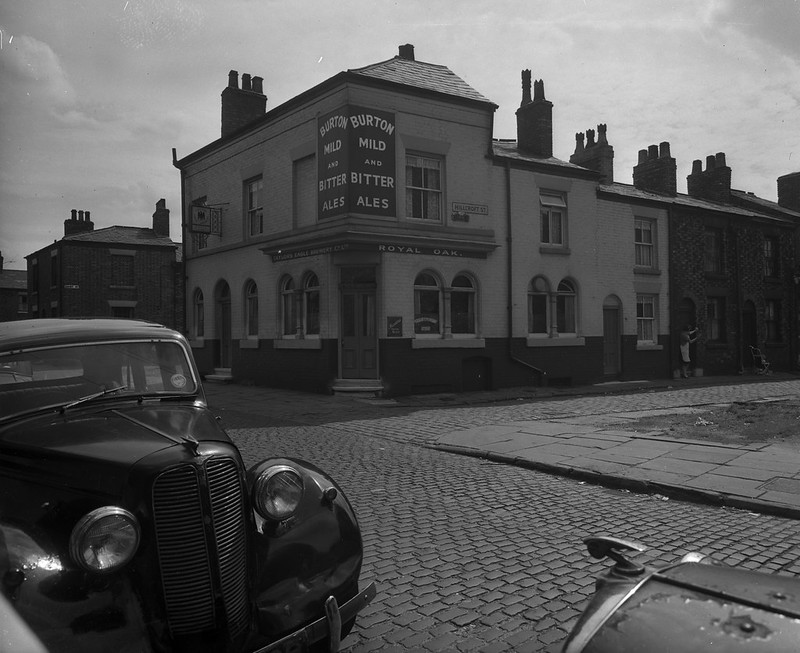