This blog was written by Dr Alison Ronan of MMU about an exciting project that will be taking place in the near future researching the Women’s Peace Crusades. 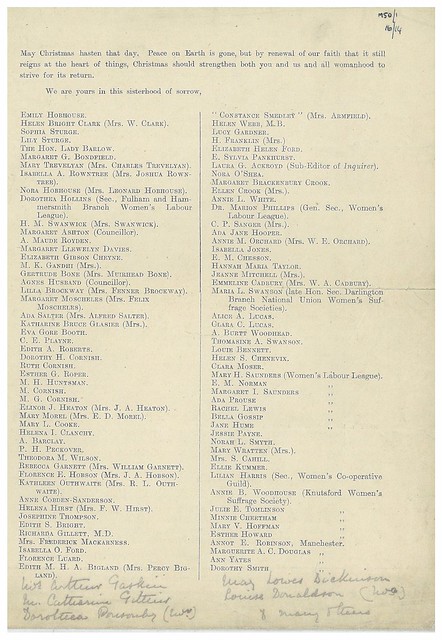 In the first winter of the First World War – in 1914 – a number of women from North West England signed the Open Letter to the Women of Austria and Germany in a gesture of sisterhood and solidarity. The letter was instigated by Emily Hobhouse, a Quaker activist who had highlighted the plight of Boers in the South African concentration camps during the Boer War, and she used her contacts across the suffrage, pacifist and socialist networks to get support for the letter. The letter appeared in the radical press in early January 1915. Over 100 women signed it and most of them went on to become involved in the British Committee of the Women’s International Congress, the organising committee for The Hague Conference in April 1915.

I could identify some of the women who signed the letter as they were to emerge in Manchester as the core of opposition to the war. They were discovered through the minutes and papers from the local branches of anti-war organisations. Amongst them were the uncompromising independent councillor Margaret Ashton, whose anti-war stance was to have personal and professional repercussions for her during the war; the passionate Scottish socialist Annot Robinson; and the young socialist and anti-conscription activist Lilla Brockway. There were the Knutsford suffrage women like Julie Tomlinson and Minnie Hoffman, and local suffrage activists like Dorothy Smith (nee Darlington) who had been the energetic organiser of the Manchester and Salford Suffrage Society, alongside another signatory Margaret Hills (nee Robertson).

One of the Manchester signatories was a woman called Marguerite AC Douglas. I had not heard of her before. I couldn’t find any reference to her in the suffrage papers nor in the 1911 census for Lancashire. Was she a suffragist? Or was she involved in the trade union or other campaigns supported by Ashton? Was she evading the 1911 census? There is no mention of her in the wonderful book about some of the women who signed the letter, Doers of the Word by Sybil Oldfield, which is an inspirational and humbling publication. However there is nothing left about how the letter was signed or passed on so I imagined women would talk to like-minded women and encourage women in their local networks to sign it. It all seems to have been done in haste.

I could find nothing about the elusive Marguerite Douglas and put her to the back of my mind.
But then, just when I was thinking about something else completely …

In July 2015 the local archivist and I were discussing a small exhibition we are planning about Margaret Ashton and her role in the city council. The exhibition spans her election as the first Manchester woman councillor in 1908 until she was edged out because of her anti-war views, by the end of the war. One of the committees of which Ashton was a member was the Midwives Supervising Committee, a subcommittee of the Health and Sanitation Committee. (Ashton was instrumental in setting up a dedicated hospital for babies, with Manchester’s first woman doctor, Dr Catherine Chisholm in 1914.) The archivist had unearthed the original minute books for the Committee and there in the minutes for 1915 was a Dr Marguerite Douglas!

What serendipity! Marguerite Douglas had moved to Manchester from Norwich, where I found her in the census working in a Norwich city centre infirmary in 1911. She had come over from the Cape Colonies where she was born in 1881. And in 1915 she was working as a medical officer for the Public Health Office in Manchester alongside the city’s health campaigner and champion Dr Niven.

I still need to do more research about her – did she know of Emily Hobhouse’s campaign from her days in South Africa? Why did she move to England? When did she come to Manchester?

For July 1915 it is minuted that she intends to marry. Did she? And to whom?

All this has made me think of the complex network of women activated by the Open letter in 1914 and how these women brought different campaigns and knowledge into the wider arena of opposition to the war.

Does anyone know any more about Marguerite Douglas? Please get in touch!

Dr Ali Ronan can be reached on alironan61@gmail.com