This excellent blog post was written by Isaac Boothroyd, a volunteer at Archives+.

In January 2016, the people of Manchester decided by popular vote to immortalise one of their women in bronze, to join the statue of Queen Victoria in Manchester city centre.

The woman they picked from a selection of options was of course Mrs Emmeline Pankhurst, the prominent suffragette and war campaigner who fought tirelessly to win women the right to vote in the early twentieth century.

History in the public sphere tends to focus attention on a few very influential individuals: Kings, Queens, Prime Ministers, and the occasional leaders of social movements. These were the prime movers and shakers who, however humble or mighty their origins, (and it’s usually the latter), helped shape the future of their country and on rare occasions the world.

This post is not about one of those people, but instead about one of Manchester’s lesser known, perhaps even forgotten suffragettes: Annot Erskine Robinson.

The Manchester Central Library and Archive contains a number of documents about Annot, ranging from personal letters and belongings to obituaries about her by those she knew and worked with. These offer a fascinating insight into someone very active in the fight for women’s suffrage and social justice, but has been largely forgotten when compared to others such as the Pankhursts.

Originally from Scotland, Annot moved to Manchester as a young woman before marrying Sam Robinson. Active in the fight for female suffrage in the years before the war, she joined the Women’s Social and Political Union, (founded by Emmeline Pankhurst), and suffered imprisonment twice for her activities, in 1908 and 1909.

By the start of the war, Annot had become disillusioned with the W.S.P.U and instead joined the National Union of Women’s Suffrage Societies. According to her obituary by Ellen Wilkinson in the Women’s Leader, this was supposedly because of “Mr’s Pankhurst’s imperious dictatorship” of the group which left Annot disillusioned with her membership.

By the onset of hostilities in 1914, these differences were cemented as a rift emerged in the suffrage movement about what stance to take on the war.  While Emmeline Pankhurst and much of the W.S.P.U threw their weight behind the government’s war effort, others, such as Annot argued the warring nations should instead put down their arms and sue for peace.

This stance was adopted “uncompromisingly” by Annot, and she was among the first members of the Women’s International League for Peace and Freedom, which aimed to unite women in the combatant nations to pressure their governments to end the war.

Helping to run the Manchester branch of the league, she was prevented by the government from attending the group’s first conference in The Hague in 1915. Undeterred by this, she is then found amongst the signatories of an open letter to the Women of Austria and Germany at Christmas of the same year, in which the signatories implored them to “all urge that peace be made with appeal to wisdom and reason.” 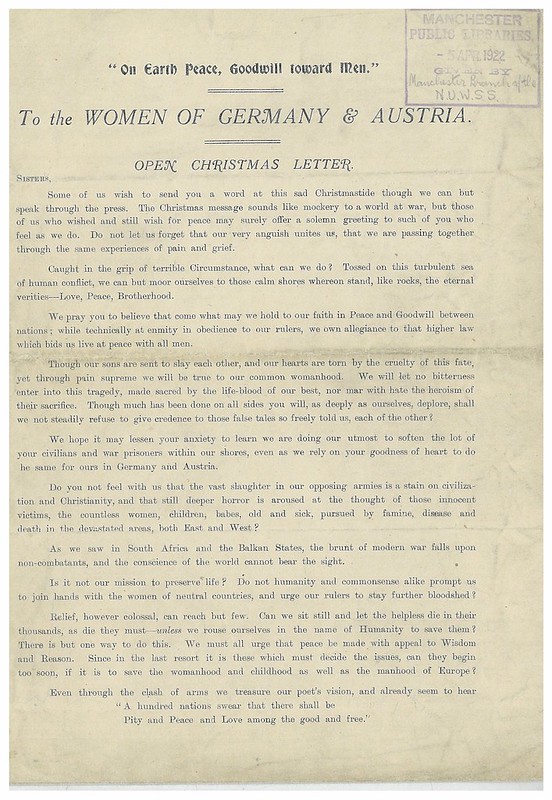 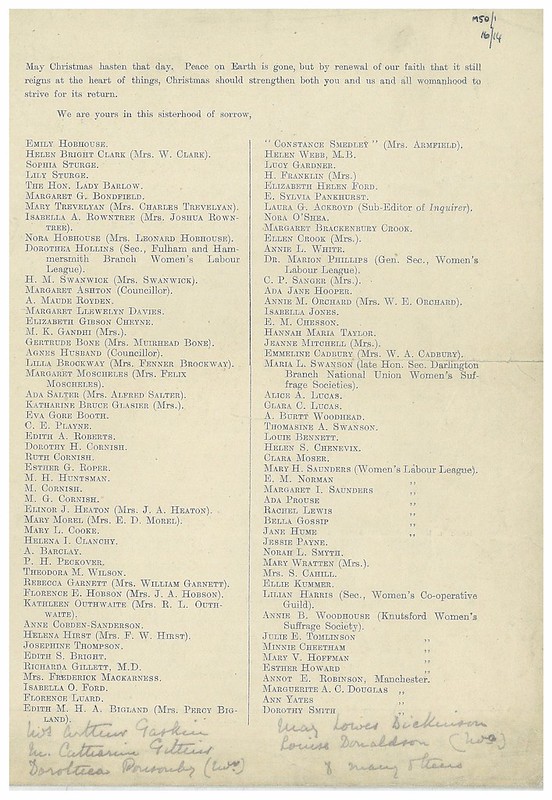 Mrs Robinson was also an important local activist and campaigner, as well as member of the Independent Labour Party. During the war she served on several local committees, in particular concerning subjects such as relief and profiteering. She was responsible for the “organising of the relief work for women in the first 18 months [of the war]”, as well as for exposing several price fixing scandals, particularly of milk.

In addition to these Annot also served on the Women’s War Interests Committee, and “was instrumental in securing better conditions for the young women munition workers.” Annot remained politically active throughout the war, detailing some of her activities in a letter of 1918, written during  a trip to London with fellow Manchester suffragette Margaret Ashton.

Following the end of the conflict, Annot lived for only seven more years, but in that time worked as vice chairwoman of the Manchester Labour Party, and twice contested seats for election to the Manchester City Council. Her work left her “very well beloved as a speaker in the Independent Labour Party and the Women’s Labour League”, and also helped to secure “a permanent place in the affections of the women of the district” for the local wings of groups she had helped to run.

Despite all of this work during the war and after, Annot has largely been eclipsed from Manchester’s history by more prominent members of the women’s suffrage movement. Undoubtedly important as the story of Emmeline Pankhurst is, we must not, in learning about it, forget the dedicated campaigners on a local level who translated the vision of a better society directly to the people of Manchester. These people, like Annot Robinson, deserve their place in our collective memory too, and should not be forgotten after the contribution they have made to our city and its people.

I would like to thank the staff of the Manchester Central Library Archives for their help with accessing the resources used in this post, as well as draw attention to the following sources used within it:

This exhibition looks at the life of Annot Robinson who was a crucial part of the Votes for Women campaigns, a staunch socialist agitating for equal pay for the women in munitions in WW1, a pacifist who organised the lively Women’s Peace Crusades across the country in 1917-1918 and worked tirelessly for the Women’s International League in Ireland and USA.  Manchester Central Library, 7th-31st March.

One thought on “Annot Erskine Robinson: A forgotten Manchester Suffragette”