This blog post was written by Andrew Cannon, a volunteer researcher at Archives+ in Manchester and is the first blog as part of our Somme commemoration.

From July to November 1916, one of the bloodiest battles, not just in the First World War, but in human history took place. For many, the Battle of the Somme truly symbolised the horrors of the Great War. The terrifying and brutal nature of trench warfare, the stalemate and tactics of attrition and death rates far beyond our comprehension today are all associated with the Somme. Over the course of the five months, over 400,000 men would be wounded or killed in the wet, muddy and disease ridden trenches of the Western Front.

The British were led by the now infamous and controversial figure of General Sir Douglas Haig who had previous military experience in Africa where he rose to prominence in the Sudan in 1898. Alongside him was General Sir Henry Rawlinson, commander of the Fourth Army who were planned to play a major role in the engagement. In addition to the regular army or British Expeditionary Force (BEF), many of the men at the Somme were volunteers and had enlisted into the “Pals” battalions. It was a new concept created by the British commanders who believed that men would be more inclined to enlist if they were able to fight with their relatives, friends, co-workers and neighbours. Men would be fuelled by local pride about where they came from and wanted to go into battle with their city on their uniform. Manchester gave nine battalions to the war effort with many of the men having their first experience of warfare at the Somme. Advertisements such as the one below were posted in the hope men would join the army and fight for their country.

We must first briefly examine why the Battle of the Somme took place. By late 1915, pressure was being exerted onto the Allied Generals by politicians who wanted to make a breakthrough to end the stalemate. Towards the end of the year, it was clear that an offensive on the Western Front was needed. The British and the French armies committed to an attack at the Somme in December 1915 at a conference in Chantilly, France.The French were enduring heavy losses at Verdun against the Germans in early 1916. Each side had just over a million men when the assault on the French fortress town took place. It was a symbol of French resistance against enemy invaders so its importance to the French was strong, for strategy and for morale.  As the French were suffering extensive casualties, with a view to relieve the pressure, the British decided to take control of the Somme offensive and force the Germans into sending some of their forces away from Verdun. The picture below is an aerial shot of Verdun. 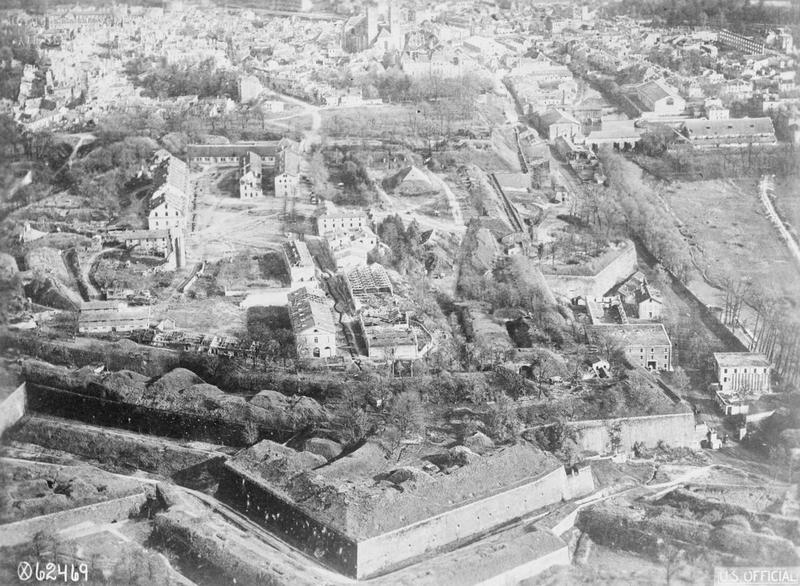 The Battle of the Somme began on 1 July 1916, but the British initiated a week long artillery bombardment of the German lines in a bid to weaken their position which started on 24 June. Over one and a half million shells were fired against the enemy lines by the British, but this proved to be a fruitless endeavour. The German trenches were dug deep and reinforced with concrete which made them extremely difficult to cause any substantial damage. The German soldiers stayed within their trenches and waited for the bombardment to stop. The sheer power and force of the shells would have threatened German morale but in military terms, it did very little.

The Somme is perhaps most famous for its first day. Due to the confidence the British army commanders, such as General Haig, had in the power of the bombardment on German lines, they believed that the men would be able to walk across no mans land and advance toward the German positions. There is historical evidence to prove that commanders did order their men to advance at walking pace as a soldier from Manchester’s 1st City Battalion remembers, “we advanced in artillery formation at a slow walk”.

The result of this tactic was 60,000 casualties on the very first day of the Somme. Out of those, just under 20,000 soldiers, many of whom were volunteers and having their first taste of battle were killed. Out of the 720 men from the 11th East Lancashire regiment, 584 of these men became casualties. Criticism of the tactics that General Haig and his fellow commanders employed has been widely written about throughout the last hundred years. Richard Hart, who was at the Somme, explains how he felt the soldiers were treated in an interview in 1981.

The British made small gains as the Battle continued but very little in the way of progress. By September, there was an increasing pressure on General Haig to make a clear breakthrough. To do this, he deployed the tank for the very first time in a bid to break the stalemate. It would have been an exhilarating sight for the Allies to witness the machine and terrifying for the Germans to watch it advance towards their trenches. One British soldier recalled:

“But I think they frightened the life out of Jerry when he first saw them!”

The tank, however, was very limited in what it could do due to it being so newly developed. It broke down very easily on the battlefield thanks to the conditions  of no mans land. As the war progressed, the Generals started to use the tank in a way that would fully utilise its powers. The tanks needed to be used alongside artillery and the infantry divisions as one cohesive attacking unit.

The turning point of the Battle, though, came later in September at Morval. The allies, by this point, had started to improve their control of the “creeping barrage” in which artillery would bombard enemy positions with the infantry slowly progressing behind it to kill enemy soldiers who had survived the artillery. For historians like Norman Stone, it was a “real war-winner” and it proved to be successful at Morval. Another breakthrough occurred at the end of the same month at Thiepval Ridge. Similar to Verdun, Thiepval was a defensive fortress held by the Germans. Under the leadership of Lieutanent General Hubert Gough, the British were able to outflank the Germans and take Thiepval Ridge and secure vital territory.

Fighting ceased as winter started to set in on the Western Front with fighting being planned to resume the following year. It is still widely discussed today about who won the Battle of the Somme. The British advanced around seven miles during the Battle but failed to break through many of the German defences. One issue that is not in doubt, however, is the terrible loss of life on all sides during this battle and one hopes the commemoration of the hundred year anniversary this year, in July, will do justice to the many of were injured and gave their lives in France 1916.