Our family was one of many to lose young men during the First World War.  This is a brief history of my three great uncles who almost survived until the end.

The three brothers, all miners, were George Henry (30), William Thomas (21) and Richard (19), all entered service at the beginning of the war.  George was living in Grimethorpe at the time; his brothers lived in Leigh.

George served with the King’s Own Yorkshire Light Infantry, a Pioneer regiment of miners tasked with carrying out service and repair work in addition to fighting the enemy.  The regiment began service in Egypt , saw action in the Somme and were in Bus-Les-Artois in France by April 1918.  War dairies show the regiment were engaged in building a munitions store and at gun enplacments around the battle area.  It was during this time on 14th April, 1918 that George was shot and died.  He was 33, and died on his wedding anniversary, leaving behind his wife Emily and three young children.

Richard Culshaw, also a miner, was in the 5th Battalion of the Manchester Regiment territorials before the war.  In May 1915 he landed in Gallipoli with the 5th.  He survived Gallipoli, though his cousin who was with him did not, and went with his battalion first to Egypt and then to France.  At some point during this time Richard moved to the 10th Battalion.  On Christmas Eve 1917 Richard was shot and died from  his wounds on 20th January 1918 – the day before his 22nd birthday.  Richard is buried very close to his brother George at Longuenesse (St Omer) Souvenir Cemetery in France.

The 5th Manchester Regiment in Egypt and France

Below the obituary that appeared in the Leigh

William the last of the surviving brothers, another miner, enlisted in April 1915.  He was gunner in the Royal Garrison Artillery 129th Heavy Battalion stationed in France.  William was injured a number of times and even survived having his horse shot from underneath him whilst carrying dispatches.  Just two weeks after the end of the war William died from influenza at Leigh Military Hospital, age 26.  He left behind his wife Annie and his 18 month old daughter, called Louis.  He was given a military funeral at Leigh Cemetery.

Lorraine attended the Thiepval Service of Remembrance and visited the grave sites of George and William.  It was an emotional trip as she recalls,

“The feelings were so overwhelming on the day.  We are all together to remember the ones that had gone one hundred years before.  We sang, cried, watched and listened together.  Wonderful music and heart breaking pictures.  10,000 people all together yet it still felt personal to each of us, I think.  I know I will never forget it.” 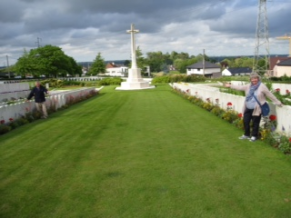 Lorraine & her husband showing how closely George & Richard are buried.

Images used with the kind permission of Wigan Archives Online