This blog post was written by Lois Dean, a volunteer at Bolton History Centre.

Men from Bolton and the surrounding districts fought bravely during the First World War and throughout the conflict more than 900 of them were taken prisoner by the Germans.

In October 1915, the local paper, the Bolton Evening News, set up the ‘Prisoners of War Fund’ to send food parcels to men in the prison camps, relying on public subscription to meet the cost of an average 6 shillings per parcel.

Some 5,000 parcels had been distributed via the Red Cross by December 1917, when the Army Council changed the system to operate through a central committee acting through regimental care committees. The Fund then confined its activities to collecting money and forwarding it to the various funds entrusted with the care of local men.

At the Armistice, the Fund had around £300 in hand and it was agreed that this should be spent in a gesture of thanks for the returning PoWs.

Thus on 21st June 1919, a grand tea and entertainment was organised by the Evening News at the Drill Hall in Silverwell Street, Bolton, which was attended by 1,450 people, the former prisoners and their wives, parents or sweethearts.

Bolton History Centre has one of the original programmes from the event that lists the name of more than 860 men, including 18 from Horwich. Also listed are the names of 37 who either died in captivity or since returning home.

The event itself was described in an article that appeared in the Evening News on 27th June, 1919, accompanied by a large photograph depicting the ‘merry throng’ in the hall, which was decorated with coloured streamers and flags of the Allied nations.  The guests were welcomed by newspaper proprietor Mr Fred Tillotson and gifts of cash, chocolates and cigarettes were given out. There was a meal of cold beef, ham and tongue with bread and butter, followed by pears and custard, cake, confectionary and of course, tea.

The Bolton Boys’ Brigade Band played during the meal and then from 5 o’clock until 7 o’clock, there was the entertainment, provided by Miss Edith Bailey (soprano), Miss Ruth Barnard (contralto) and Mr Herbert Baron (baritone), accompanied at the piano by Miss Dora E Crossley. Humour was provided by Mr Teddy Whittle. After this, the Boys’ Brigade Band, conducted by Mr Palmer, played for dancing until 10pm.

Earlier, in January 1919, a welcome tea and entertainment had taken place in Edgworth’s Institute Hall for the men of Edgworth, Turton, Entwistle and Quarlton who had returned from the prison camps.  They were H Barton, J Parr, H McKeown, E Ball, J Hayward, A Ramsbottom, W Warren, T Gregson, W Duckworth, W Hough and J Ridings. Two others, R Greenwood and A Warhurst, had not yet managed to return to Edgworth.

Major Booth from the local Prisoners of War Committee paid tribute to the former prisoners, speaking of the suffering they had undergone in the camps, and thanked all who had contributed to the fundraising for food parcels which had been sent.  He presented each of the men with a £5 War Bond.

An article in the Bolton Journal from October 1915 listed men from the area who were in three German PoW camps, Doeberitz, Sennelager Bei Paderborn and Wittenberg. It quoted from a piece in The Times that described the hardships endured by the British prisoners of war and the need for food parcels and asked Journal readers to give 5 shillings to provide a parcel containing 2lb sugar, half a pound of cocoa, tinned coffee and milk, 2lb syrup, a tin of herrings in tomato, six Oxo cubes, a 1lb tin of dripping, a tin of condensed milk, Lifebuoy soap, a pipe and 2oz tobacco.

In June 1918, another Journal article described parcels that were being sent to the men of the 4th and 5th Battalions of the Loyal North Lancashire who were now prisoners.  Items here included tripe and onions, corned beef, baked beans, the inevitable dripping and something described as ‘oval beef’, which must have been tinned meat. Also included was ‘Gong Soup’, a dried commodity the flavours of which included ‘celery cream’, ‘artichoke’, ‘ox tail’ and even ‘mock turtle’! 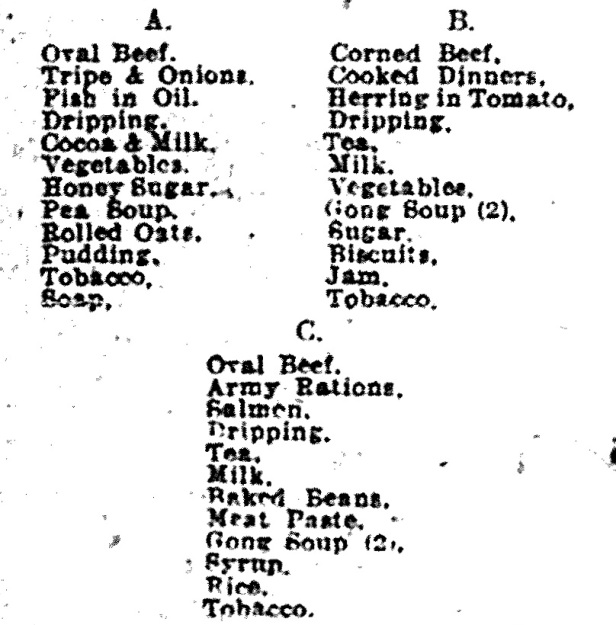