Volunteer Chris Prince came across the journal of Kenneth Callan McArdle whilst rooting around documents in the collections at Ashton Local Studies Centre.  The 2nd Lieutenant served with the 17th Manchester Regiment and wrote what Chris describes as ‘a very powerful peace of literature’.  We will be sharing two entries from the journal over a series of blogs over the next few days.

2nd Lieutenant Kenneth Callan McArdle was born at Seatown Place in the quiet town of Dundalk in Ireland. At age 12 he obtained an Education at Stonyhurst College and spent his childhood there. He joined the Manchester Regiment on August 4th, coming back from California where he had been working as a hop grower and eventually as a banker in San Francisco. [1] 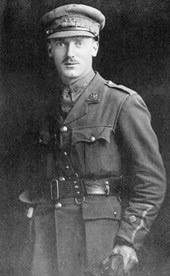 2nd Lieutenant Kenneth Callan McArdle was killed in action in the Somme Offensive in Trones Wood on the 9th of July.  Three days before his death, he wrote in his journal his account of the Capture of the Montauban, the first engagement in the Battle of the Somme. His entries on the 30th and 6th, before and after the battle, give a powerful portrayal of the violence and loss felt by the soldiers who endured the Battle of the Somme.  A reflection on not only the battle but of the war itself.

‘Tonight’s the night! Tomorrow is ‘Der Tag’. Only four officers per company go over; yet although I missed all the wonderful training the other seven had, I am to go in with the Company. Oh blessed Adjutant Macdonald! The others have done it over and over again; stormed the trenches, taken Montauban and Glats redoubt a dozen times, down by Picquigny. Where it was all marked out with flags and shallow trenches exactly to scale. They know every house (as it was before we bombarded the village with 12” shells); they know every yard; where every man is to go. They have passed most of it on to me.

Tonight in the dark we assemble, brigades and brigades and more and more brigades. Tomorrow in the pale dawn we go over; we, the 17th, will take Montauban. It is an honoured post.

There is a solider’s song running through my head, I can’t put it away:

‘Are you the O’Reilly that keeps the hotel?

Are you the O’Reilly they speak of so well?

If you’re the O’Reilly they speak of so highly 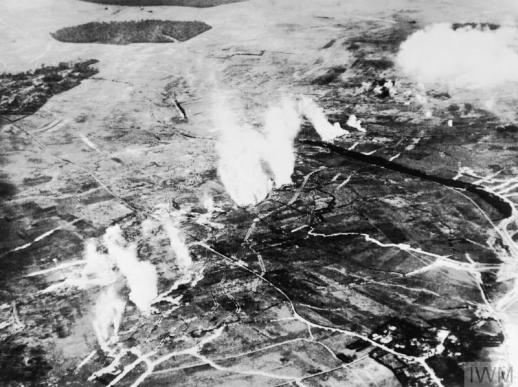 Aerial photograph showing a gas attack by the British  between Carnoy and Montauban in June 1916. Montauban is at the top left of the picture. *Courtesy of the Imperial War Museum.

The next blog will be the first part of the journal entry from 6th July 1916.

*Aerial photograph showing a gas attack by the British  between Carnoy and Montauban in June 1916. Montauban is at the top left of the picture. *Courtesy of the Imperial War Museum – catalogue number – Q55066 – http://www.iwm.org.uk/collections/item/object/205021931