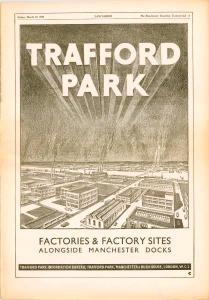 In this blog post, we find out how Trafford Local Studies has contributed to the Made in Greater Manchester project.

Two of England’s earliest industrial areas lay within the boundary of Trafford – on the south was Broadheath and to the north, Trafford Park. Both of these industrial estates were world leaders in their day.

From their early beginnings in the late 19th century, they produced a variety of documentary and photographic evidence illustrating the development of these important industrial areas both as places of work and places to live.

The symbiotic relationship the between the two canals; The Bridgewater Canal and the Manchester Ship Canal, and the manufacturing industry provided  for the ease of transportation of both raw materials and goods, which in turn allowed for continuing industrial success for many years.

Trafford Local Studies have been working with two volunteers, who have been researching uncatalogued photographs of Trafford’s industrial past and identifying places for inclusion on the GM Lives catalogue. Using the skills they have obtained from the project, the volunteers have looked through old newspapers to find out if there is any background information on the photographs in order to identify relevant details on companies that were once based in the area, and have long since gone. These companies were once familiar household names and were the foundation of Industrial Britain and included British Westinghouse, Ford, ICI and Metropolitan Vickers in Trafford Park, and Linotype and Budenberg in Broadheath.

Rosie (a volunteer at Trafford Local Studies) commented on the work she has being doing on the project:

It has been particularly interesting to see photographs from the early days of Trafford Park, especially the building of the Westinghouse Company (later GEC) from 1900.  The collection includes a series of photographs taken by the Clerk of Works throughout the building project, so that you can see the development growing.  There is also a photograph of the Canadian team, led by James Stewart, which was brought in to speed up the work.  In 1901, there were less than 250 men working on the site, within a week of his arrival this had been increased to 2,500 and was eventually to rise to 4,000.

We’re now going through a large archive of photographs from the Stretford and Urmston Journal, extracting photographs of Trafford companies.  As this is a local newspaper the company photographs are mainly of groups of staff, retirements, presentations, sports events etc.  It is interesting to see Trafford companies from the point of view of the employees, and how often they appear – these companies were crucial employers in the region.” 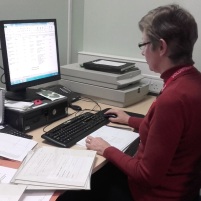 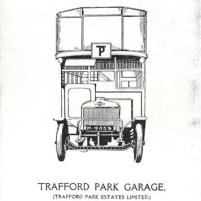 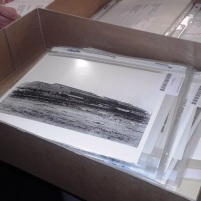 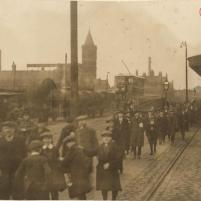 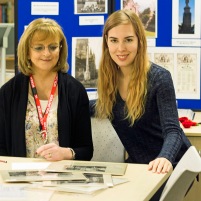 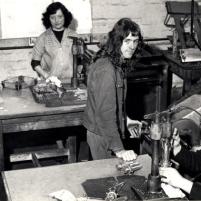